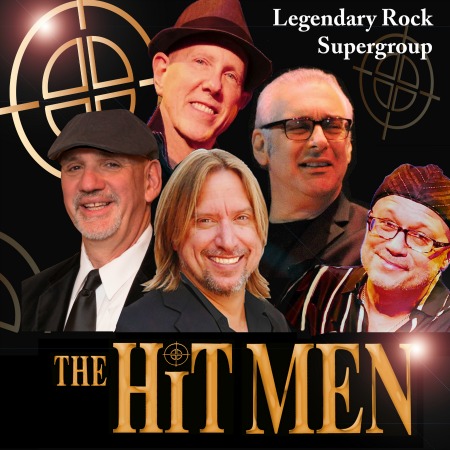 Take a star-studded journey through rock & roll history with these legendary performers who sang, played or recorded with some of the biggest names in the music biz: Elton John, Carole King, Cat Stevens, Jim Croce, Carly Simon, Frankie Valli, as well as members of Journey, The Rascals, Three Dog Night, The Turtles and The Who. Not a tribute band, The Hit Men are the actual musicians and singers you heard on the original records, listened to on the radio, watched on TV or saw in concert. In this fantastic Hit Men Live multi-media show, they bring on the hits by artists they have performed with on stage and in the recording studio -- songs like “Don’t Stop Believing,” “Who Loves You?,” “Pinball Wizard,” and “Joy to the World.” Plus, they’ll take you behind the scenes with “insider” stories about what it was like on the road and in the recording sessions with rock royalty. Relive the greatest years of rock & roll with The Hit Men. You’ll leave the theater feeling like you are twenty three years old again!

Copyright © 2020 Madison Center for the Arts, All Rights Reserved. - Ticketing System by Shovation